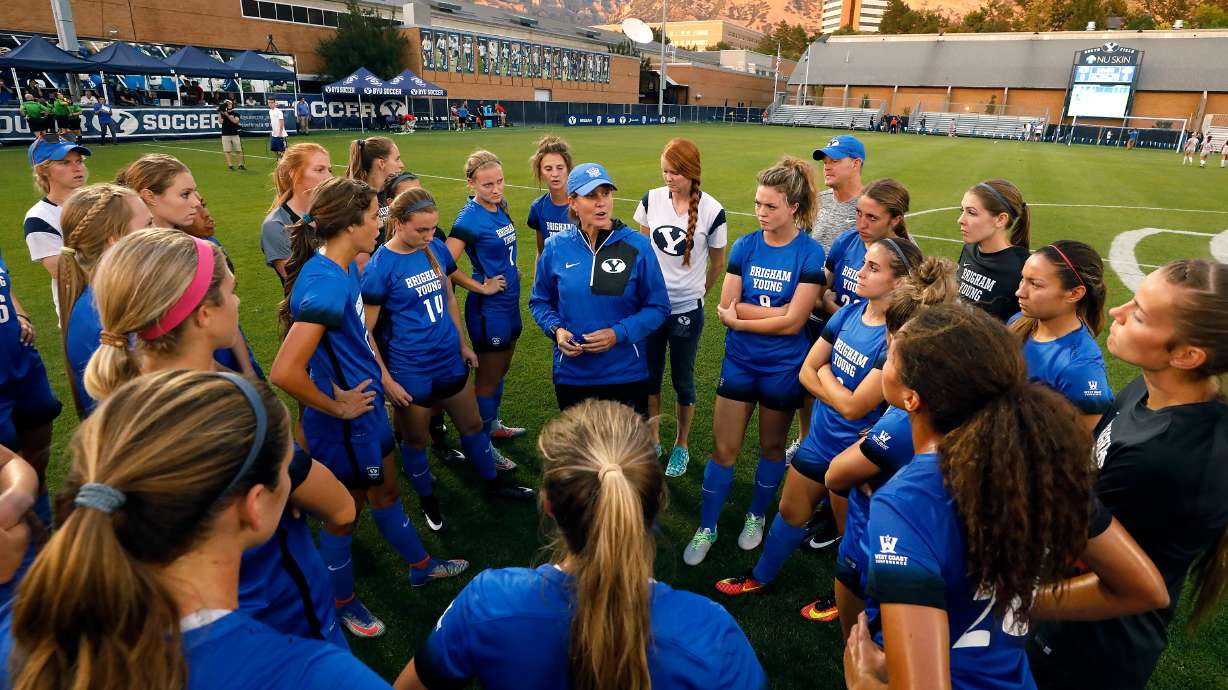 BYU coach Jennifer Rookwood speaks to the women’s soccer team after a goalless draw with Ohio State at Southfield in Provo, August 21, 2017. After another year at the Senior World Championships, Rookwood will lead the Cougars to the Big 12 competition in 2023. (Garen Wilkie, BYU Pictures)

PROVO – Living on the East Coast and scoring in buckets with the Washington Spirit in the Women’s National Football League, Ashley Hatch admits she doesn’t come back to Utah as often as she or her native Utah husband would like, which is why a chance to play in front of friends and family With the US women’s national team at Rio Tinto Stadium is a special opportunity for the BYU Division.

But whenever she finds herself in a beehive, there is one place she always goes. Back in Provo, we’re back at her old pitches, back to the one person she always sees: her old coach Jennifer Rockwood, who first moved the BYU women’s soccer program into the NCAA ranks in 1995 and has been there ever since.

“Jane is a legend, and I am so happy for her and the program, for everything they accomplished last year,” said Hatch, who followed closely as the Cougars put together a historic 17-5-2 season and a historic season. Running for the national championship match. “It’s definitely worth it. You’ve put in so much work with this team, and you deserve it all. I’m excited to follow all of their success.”

The Cougars will try to repeat that from last year, even without the likes of current NWSL pros Michaela Coluhan and Cameron Tucker or base guard Cassidy Smith. But the foundation that includes Jimmy Shepherd, Natalie Wells, Olivia Wade and Breckin Mozingo continues to move forward.

And with Rockwood in charge, Hatch is confident of the team’s next big step.

A lot will be done starting on Wednesday – if not already – to move the Cougars into the Big 12 when the league hosts the final football media day of the FBS independence era at the BYU Broadcasting Building. There is still one year to independence – and for Olympic sports like women’s football, one year left in the West Coast Conference – but in many ways, the program should prepare for the Big 12 now.

And BYU soccer, they already have it.

Under Rockwood’s leadership, the Cougars have built one of the best soccer programs in the country, with a 0.714 win percentage and a NCAA Championship berth in 20 of the last 25 years, to align with 27 All-Americans, five MAC Hermann Trophy semi-finalists, and one of the finalists in the Colohan for the college football version of last year’s Heisman Cup.

They’ve also gone toe-to-toe with the best programs in the country, and that won’t change this fall, with no-conference tilts starting August 13th in North Carolina and home dates with Alabama, Arkansas, and Utah to align with road trips to Colorado and Ohio, among others.

“I think BYU’s style of play would fit right in (well in the Big 12), to be honest,” Hatch said. “They are a team with a very offensive mentality, they are very aggressive, very fast, and I think they will achieve a lot of success.

“Girls who come to play in BYU can expect a lot when they play in the Big 12.”

A permanent team of the top 25 teams in the coaches survey, Brigham University women’s football has ditched the much-cited “middle major” category reserved for schools outside of the Power Five conferences, or Power Six with the Big East in some sports like basketball – And in many ways, it was the same for her conference.

In last year’s final coaches standings, three teams from the West Coast Conference were ranked in the top 25, compared to three from the PAC 12, two from the American Athletic Conference, and only one from the Big 12 – No. 9 TCU.

The Horned Frogs are well known to BYU since the duo’s days at Mountain West, and last year’s regular-season Big 12 champions are still heavily recruited in the BYU region, including California and parts of Utah such as Waterford’s latest featured Seven Castain. They also only have six NCAA tournament games — all since joining the Big 12 — including the round of 16 in their last two tournaments.

Beyond the TCU, the depth of consistent NCAA Championship teams in the Big 12 is almost limitless. In some ways, the top three at UBC, Santa Clara, and Pepperdine might be better.

Texas boasts one of the league’s most impressive historical resumes, having made 15 NCAA appearances since 2001 and four trips to the Round of 16. history with them.

But compare that to No. 4 Santa Clara, a two-time NCAA champion with 12 College Cup appearances dating back to 1989. Or even Portland, a program that finished only fifth in the WCC a year ago but also features alumni like Shannon MacMillan, Christine Sinclair and Megan Rapinoe of the US and Canadian women’s national teams – plus two national titles, eight College Cup berths, and 14 national quarter-final matches.

Even the 13th-ranked Pepperdine, a relative newcomer to the national scene, boasted 11 NCAA games and three Round of 16 games in 24 seasons under coach Tim Ward.

And of course, there’s BYU, who finished last season second nationally after falling to Florida State on penalties in the College Cup Final.

“We are fortunate to play in the WCC, which is a very good women’s football conference with Santa Clara and Pepperdine also in the top 15,” Rockwood told BYUtv recently. “Our conference keeps getting better, from top to bottom, and we have another year to really prepare for that. But we have a great schedule for no conferences… and we expect to be ready for the Big 12 in 2023.

“The same expectations will follow as we head into the new conference.”

Much remains to be determined about BYU’s future in the Big 12, including how many conference games the Olympic Cougars will play annually. Rockwood has hinted that an unbalanced schedule is possible, and teams likely won’t play each other more than once per season, not an annual home-and-home arrangement.

It has also become more likely that Texas and Oklahoma will remain in the league through at least the 2023-24 season, marking a 14-team conference that also includes Cincinnati, Houston and the UCF. The Longhorns and Sooners are not contracted to join the SEC until 2025.

This does not mean, of course, that joining the conference is not worth it. Adding and including resources in Power Five is worth any leaps and bounds. But she may not change as much as she thinks about the strength of women’s football on the Wasatch front.

However, it is a positive step forward.

“It opens a lot of doors for BYU sports in general, but specifically for the women’s soccer team.”

A proud alumnus of Syracuse University, Sean Walker has covered BYU for KSL.com since 2015, while also mixing in prep sports, education, and whatever else his editors hire him to do.