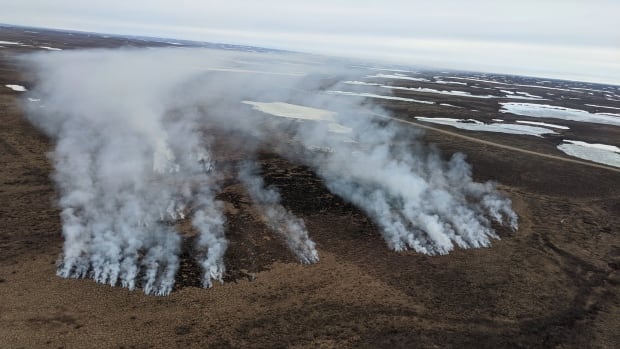 There have been more bushfires so far this year than the 10-year average in the Northwest Territories, but the season will likely be average, says Richard Olsen, director of fire operations for the Department of Environment and Natural Resources.

“Overall, it looks like compared to the past three or four years, we’re entering into what I would call an average fire season,” he said, “with the potential for some severe drought, potentially severe fires around Slave Lake again.”

But the total area burned so far is “significantly less” than the average area burned at this time of year.

So far, there have been 36 fires in the territory affecting 6,119 hectares of land, with 17 fires declared. This compares with the 10-year average of about 35 hectares of fire, which affected about 23,000 hectares, Olsen said.

Olsen said 19 wildfires were burning in the northwest as of Monday. The last fire started within the last 24 hours.

All active wildfires appear to be caused by lightning, according to the Ministry of Environment and Natural Resources (ENR).

There have also been a few wildfires caused by people this year that have since been put out. Olsen said those fires are still under investigation.

“We always like to remind people that in the summer, don’t let campfires turn into wildfires and make sure your fires are completely extinguished before you leave,” he said.

The largest fire currently still burning is located about 55 kilometers southeast of Fort Resolution and has an area of ​​about 250 hectares. The ENR website says the wildfires are “receiving limited action to protect values ​​in the area.”

Olsen said the territory’s fire resources are in a “relatively good place” with 33 firefighting crews (each made up of four members) spread across the NWT. Helicopters available.

He said that if the season is too busy, the department has the ability to order more resources if needed.

drier areas near Great Slave Lake, on the eastern border

Across the region, the fire hazard was rated between “moderate” and “severe.”

Yellowknife is enjoying a dry summer weather so far. On June 9, the city issued a mandatory ban on open burning. Includes the use of approved fire pits within the city due to “very dry conditions” and less rain in the forecast. The ban is still in effect.

“Most of the fire activity was around the Great Slave Lake area,” Olsen said.

“What we are starting to see is that there is some good drying going on [on] up around Yellowknife and parts between Great Slave Lake and Great Bear Lake and across to the Nunavut boundary to the east.”

For now, he said, there is no indication that there will be any severe droughts or areas of concern “where we are looking at really deep fires for extended periods.”

“If we continue to get some good drought over several weeks with little rainfall, any kind of fire that starts at least on the surface has the potential to spread,” he warned.

Olsen said last year’s fire season, like the few before it, was a little slower in the NWT.