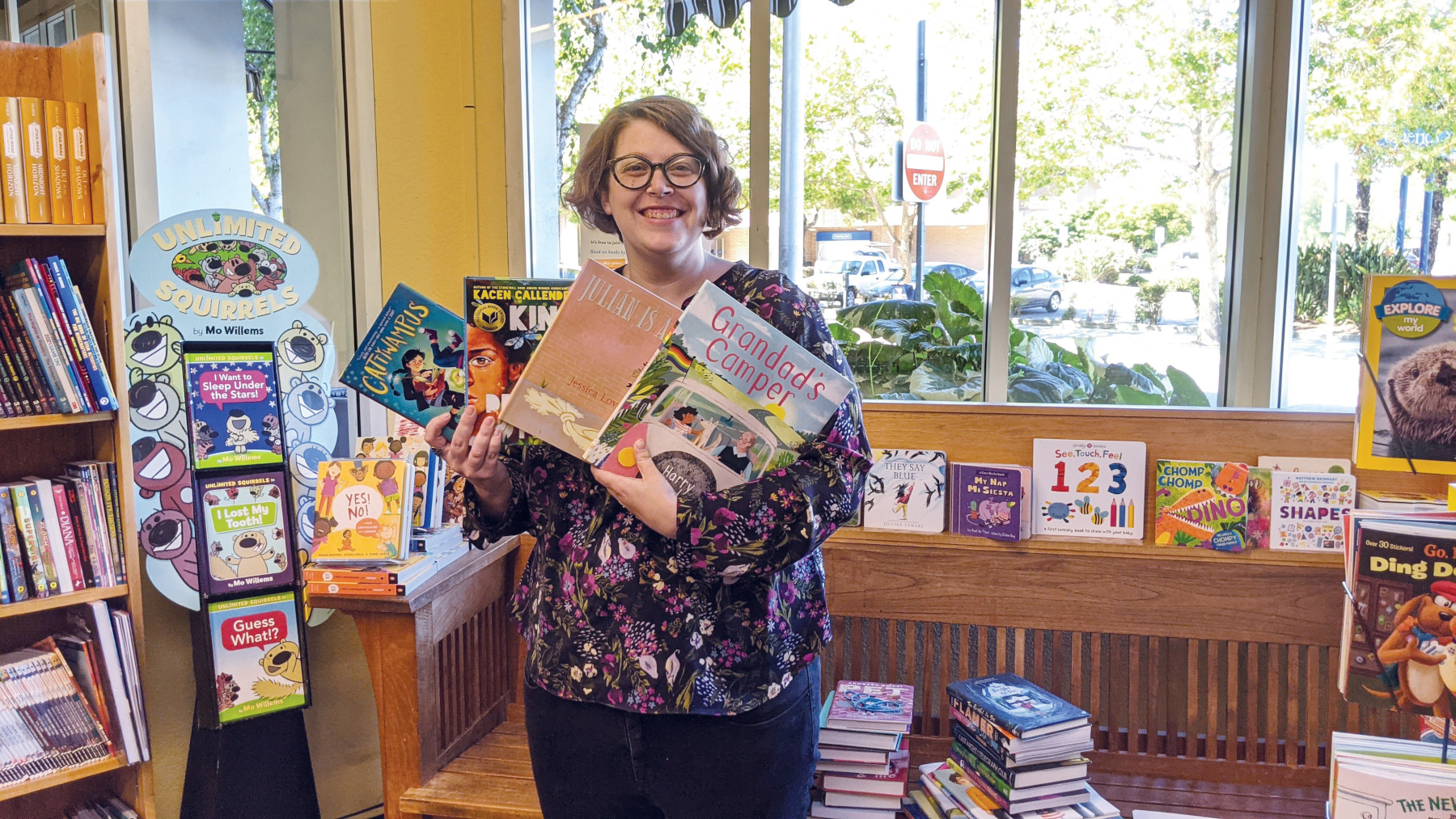 As the nation celebrates LGBTQ+ Pride month, Santa Cruz County remains at the forefront of representation and inclusion while celebrating diversity. On Tuesday, June 14, the Santa Cruz County Office of Education (SCCOE) held a press conference to announce its newly created LGBTQ+ Top 40 Booklist: a comprehensive guide to age-appropriate reading and LGBTQ+ reading for students from pre-kindergarten through high school. .

“I am really proud to live in Santa Cruz,” says Rob Darrow, project advisor and staff member. GT. “We help encourage and enable students to read a variety of books across our county.”

The Top 40 book list is the culmination of four months of collaboration between 16 different members of the staff — from education consultants like Darrow to librarians, schools, book lovers, the Santa Cruz librarian and the high school student who inspired the project. The QUER Youth Task Force and the Safe Schools Project also contributed to the list.

Ten books were selected each for grade groups K-2, 3-5, 6-8, and 9-12, and the list provides graphic fiction and non-fiction, as well as anthologies and graphic novels. Each title had to meet a certain set of criteria, including a protagonist who was part of the LGBTQ community and was positively represented. The stories also had to represent different genders, sexual orientations, and ethnicities, and had to be disseminated over the past 10 years.

“We want to make sure that every student in our county has access to these resources,” Santa Cruz County Director of Education Dr. Faris Sabah said at the press conference. “Not only for LGBTQ students to see themselves reflected in the books, but also for allies to get to know each other so we can grow together as a community of strength.”

Among the other speakers in Tuesday’s announcement was Lisa Bishop, the former president of the California School Library Association. She agreed that students at all stages of learning should have access to the widest and most diverse of books.

“I want to tell you that the California School Library Association fully, fully and completely supports the Santa Cruz County Education Office and the LGBTQ+ Book Selection Task Force,” she told the audience.

Ivy Quirk, who sympathizes with the LGBTQ+ community and is a senior children’s book buyer at Bookshop Santa Cruz, says the task force group — which was for grades 3 through 5 — screened about 50 titles to select the top 10.

“We also looked at the stories of the author himself – is someone speaking from the community or to the community?” explain to GT. “Many authors write in different age ranges, so we wanted to make sure we highlight everything we can. [without much crossover]. ”

The project’s origins go back to 2020, when a Scotts Valley High School student named Q Licht started the purple poster project. Santa Cruz District Education gives credit to Licht for conceptualizing the project after he visited Copperfield Books in Petaluma and saw how they highlighted the books with positive LGBTQ+ representation.

“I wanted to make a difference in my community by putting in place a system that could make school libraries more like Copperfield books,” Licht, who did not respond to an interview request, wrote on his website.

He set out to work with Soquel High School librarians to place purple square labels on strange books, and created a growing online list of titles.

Meanwhile, Darrow — who was a history teacher and librarian before becoming an LGBTQ+ support counselor — says teachers are constantly asking for positive reading for their students.

“Since I’ve been doing workshops across the state for the past five years, one of my greatest educational needs is saying to me, ‘Can you just give me a list of the best books to read?'” “

In 2021, Darrow met Licht at an LGBTQ+ Town Hall webinar sponsored by SCCOE, and the two discussed promoting the purple label project. The momentum continued when a guest speaker at the webinar donated his salary to SCCOE to advance LGBTQ+ pledges as well as the Purple Sticker Project. Last October, Bookshop Santa Cruz organized a promotion to raise funds for the purchase of LGBTQ+ books for use in school and public libraries.

Quirk says she is proud to be part of a project that helps LGBTQ+ students feel visible.

“It’s important for many reasons, but on two very specific fronts,” she explains. “First, it helps kids in the LGBTQIA community who may still be finding out things about themselves to see themselves being represented in some way. When you can put a name to something, it often helps anyone get past it.”

She says acting is also important for students who no Learn about queer society, as it allows them to develop empathy and understanding for what their peers may be going through.

“Their presence in the library so visible and visible says a lot about the kind of support the LGBT community can get in schools, and it’s something their peers should be thinking about how they can support each other.”

According to research, LGBTQ+ students are some of the most at risk students. A 2021 study by WestEd of California Students—a nonprofit agency that works with educational communities to advance student well-being and learning—found that young adults who identified as gay were more likely to report being bullied two or more times, and less than half reported feeling safe in The school. Transgender and intersex students were more likely to have depression and to report suicidal thoughts.

The study authors emphasized that if LGBTQ+ students received the same support and safety as other students, inequalities would be cut in half.

A 2019 study by the LGBT Education Network (GLSEN) found that the statistics are similar across the country, and it affects student studies as well. This report discovered that LGBT youth who experienced discrimination were three times more likely to miss school, had a lower GPA and were more likely to drop out than those who did not experience discrimination.

Banned in the United States

Nationally, the LGBTQ+ Top 40 Booklist comes at a time when school districts across the country continue to ban books at an alarming rate.

In January, the McMinn County School Board in Tennessee voted unanimously to ban mossPulitzer Prize-winning graphic novel by cartoonist and former UCSD guest lecturer Art Spiegelmann, for its hateful language and its depiction of nudity, violence, and suicide. moss He details the author’s first-hand experience dealing with his parents as Holocaust survivors, and losing his mother to suicide years later.

Last December, a bill was introduced in the Oklahoma State Senate that would prohibit state public school libraries from holding books related to sexuality or sexual and gender identity. According to the American Library Association, last fall they received 330 book challenges, an “unprecedented” number.

“It adds emphasis on the importance of why we need government agencies, schools, and libraries like we do,” says Nick Ibarra, Santa Cruz County Communications and Public Relations Officer. To get together and say, ‘It’s he is Suitable for students to read these stories. When other states and schools ban these books, it underscores the importance of what we’re doing.”

“There is no research showing that teachers force children to read a certain book that makes them think a certain way,” says Darrow. “Getting publicity is a political tactic, and it would not do our students well to deny them an extensive list of books to read.”

The address is mine

Among those selected for the Top 40 list are books with Bay Area authors or focusing on Bay Area history and queer society. For grades 9 through 12, notable Bay Area authors such as James Brandon (Ziggy, Stardust and I) and maya kobabe (Querified sex: a memoir) They are Darrow’s favorite choices.

For Quirk, some notable books are the winner of the National Book Award for Youth Literature The king and the dragonfly by Kacen Callender (rows 3-5), julian mermaid By UC Santa Cruz alum Jessica Love (before K-2) and Grandad camp by Harry Woodgate (pre-k-2).

“I like Grandad camp Because it shows a biracial family and an old gay, which we don’t see a lot of acting for,” she explains. “As a millennial, a lot of the previous generation of gays haven’t made it to old age, so it’s really nice to see.”

Selected books for the LGBTQ + Top 40 Booklist are available at public and school libraries and are also on sale at the Santa Cruz Bookshop. For Darrow, the hope is to keep the list alive and growing, while adding books as they are published for future generations of students.

“What’s even more exciting is that there are now hundreds of titles with great gay and transgender representation that have come out in the last 10-20 years.”

Going forward, the Santa Cruz County Office of Education is working on how to provide schools with newly selected subjects.

“Our goal is to provide a set of these books to every school library in Santa Cruz County,” Sabah said at a meeting on Tuesday. According to Darrow, achieving this goal will cost an estimated $30,000.

There should also be money close to the state legislature, Bishop told the convention.

“We try to make sure it gets straight to school libraries instead of scattering it everywhere,” she said. “Please ask your manager and your supervisors to allocate that money to this project.”

The LGBTQ + Top 40 Booklist can be found at sccoe.link/lgbtqbooks.