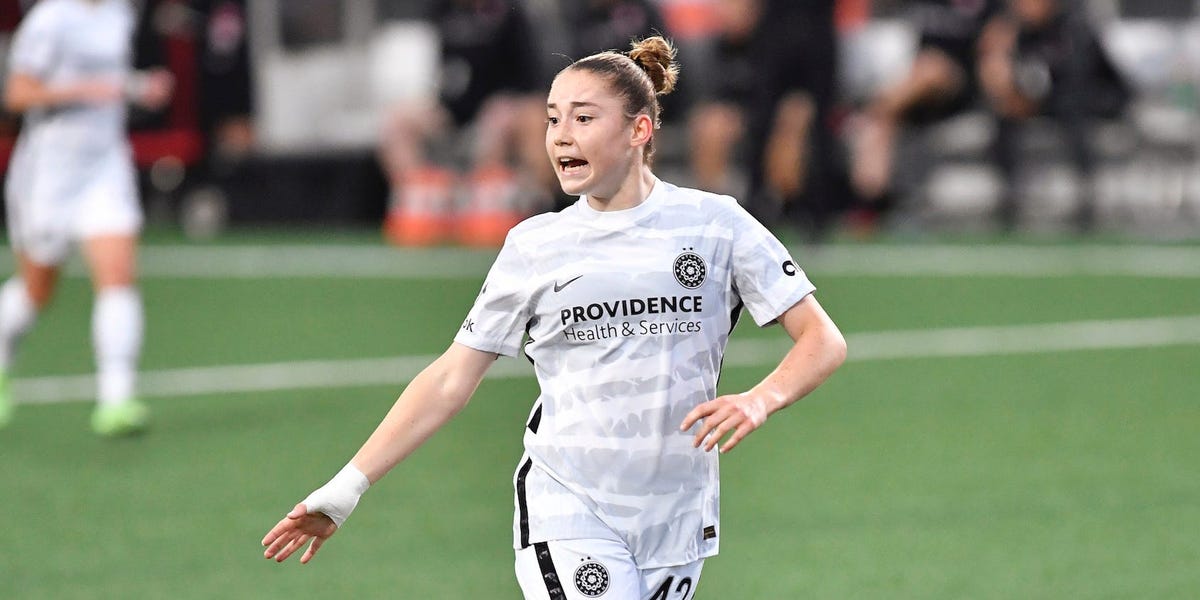 Olivia Moultrie has long been seen as the future of women’s football in the United States.

The California-born prodigy went from an 11-year-old UNC player to a 13-year-old professional, and two years later, she became the youngest NFL player and top scorer in league history. Now a midfielder for the NWSL’s Portland Thorns, after a long legal battle over her right to play, Moultrie realized many of her dreams before she became legally eligible for a driver’s license.

However, it is determined to continue to “push the status quo”.

“I’m fighting for a lot of these things and I’m trying to be equal, but I look at the women’s national team now and the athletes who were fighting for this before I got into this arena, and the thing that makes me want to keep it is that I do that,” Moultrie told Insider. I see how much they’ve done for the women’s game already.” That’s really what motivates me to want to push for more, because you’re still seeing what guys have and we’re not there yet.

Her latest partnership, a deal to become the first female ambassador for sports technology company Playermaker, advances this initiative to give female athletes access to resources on par with what men get regularly. Only 6% of the sports and exercise science studies are devoted to women, but Playermaker — who monitors performance metrics for athletes via trackers strapped to their shoes — helps turn the text.

The brand is dedicated to making high-level personal data accessible to athletes of all races and skill levels without the exorbitant price tags. For Moultrie, a self-confessed “nerd” about the science behind performance, the opportunity to work with Playermaker was matching on a number of levels.

“I feel very fortunate, first and foremost, to partner with a brand whose product I really like…it’s so easy to apply what I do every day,” Moultrie said. “And then it is clear what the Playermaker is striving to achieve in the world, which they are looking to achieve, in terms of creating equality and opportunity for men and women.

It doesn’t hurt that the product helps Moultrie with her own training. She started using Playermaker during off-season training at the Portland Timbers Academy, and remembers finding her data shows “immediately very exciting.”

Now, she has her own set that she wears during training sessions. They attach heels to cleats and don’t get in the way of touches or play. Then, after she calms down, she can access all kinds of information about her exercise — including the differences between her left and right feet, her top speed, and the total distance she’s covered — all on her phone.

“I go back and put them back in, and my whole session will be synced in just two minutes, and I can just look at all the data,” Moultrie said. “Very easy for me, very little effort for me to put them in and train with them. But the rewards of seeing all the details and all the information they can give me, it’s totally worth the three seconds it takes to put the sensors on before each training.”

All of this fits seamlessly into Moultrie’s lifelong pursuit of two recognized ambitions: “working for women’s equality and equal opportunity in sport” and “the desire to be the best player in the world.” It’s safe to say she’s way ahead of the schedule on both fronts, thanks to the diligence instilled in her from as early as she can remember.

“My parents are really great at these things—I can give them a lot of credit, in terms of helping me understand what it looks like to me and being realistic about the fact that if you want something, you get to say you want it. [and] “You’re going to have to work for it,” Moultrie said. “You can’t just say, ‘I want to do this,’ and then hope it all works out. So it was definitely a big deal for me in terms of admiration, [realizing] You have to work for what you want and that’s the biggest part of it.”

Since she was a child, Moultrie’s parents have encouraged her and her younger sisters to write down their goals in order to visualize “what you want your future to look like” and identify the intermediate steps needed to make that dream a reality.

Moultrie says the next on the list will make the US national youth squad roster for the FIFA U-20 Women’s World Cup in August, where she competes alongside players four years older than her. She’s also working to create a bigger role with Thorns and soak up as much wisdom as possible from her fellow NWSL veterans.

And off the field, Moultrie is focused on helping make the league stand out. Later, she hopes to “fight for more” in the next players’ collective bargaining agreement (CBA).

But this will take some time. And while she’s uniquely excited to keep moving forward, it’s not unrealistic.

“[I’m] “I’m just trying to get as much experience as I can, play for as many minutes as possible. Because obviously, you know, I’m 16,” Moultrie said.