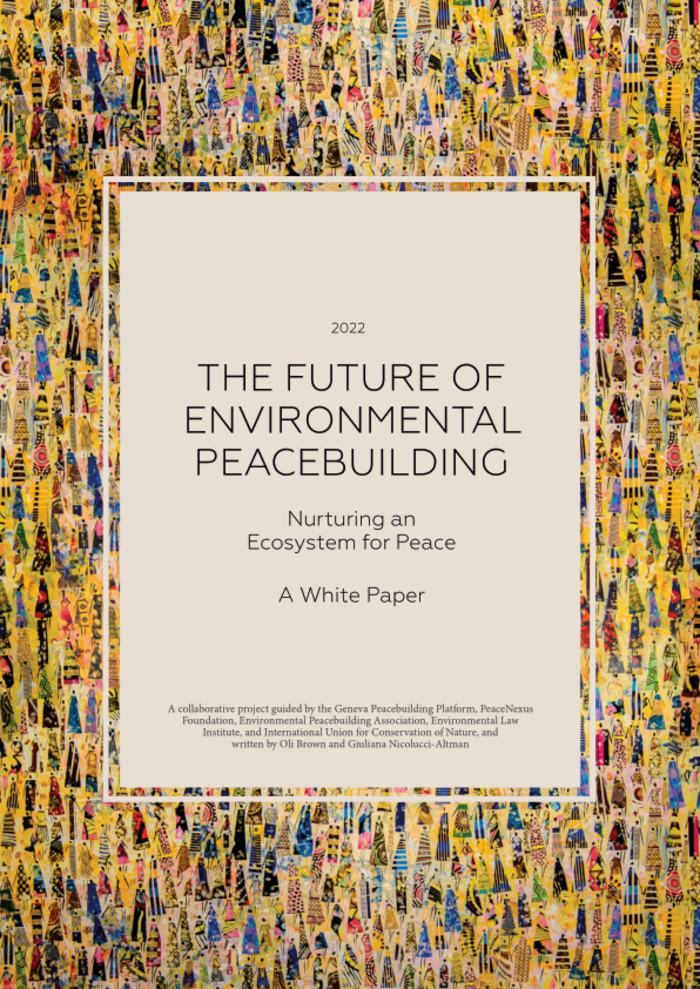 The White Paper on the Future of Environmental Peacebuilding aims to deliver a strong and compelling message about the importance, evidence and promise of environmental peacebuilding to the Stockholm+50 Forum in June 2022.

The term “white paper” is commonly used in government departments to refer to a balanced, publicly available document designed to help readers make decisions. This white paper seeks to encourage debate and discussion about the challenges, opportunities, and potentials for building environmental peace in conflict-affected countries and communities. The paper and abstract are the product of a global conversation about the future of environmental peacebuilding and are drawn from extensive academic work and practical experience.

This white paper is inspired by many voices. Despite its brevity, the white paper hopes to emphasize the growing body of approaches, ideas, and visions for the future of environmental peacebuilding.

Below, the executive summary is excerpted. Read the entire paper by downloading the PDF file above.

1. The global context of environmental peacebuilding

We know that the human race is already in conflict with the natural world – a struggle in which we can only be victims, not victors. Experience shows that it is no longer desirable simply for peacebuilding interventions to incorporate environmental threats; It is now absolutely necessary to mainstream integrated, effective and sustainable environmental peacebuilding policy and practice to ensure lasting peace for the future of our planet.

With often similar root causes—including weak or corrupt institutions, discrimination, inequality, poverty, marginalization, and overexploitation—converging crises of conflict and environmental degradation can reinforce each other, with climate impacts likely to exacerbate one another. The cycle of conflict and the weakening of institutions needed to build resilience.

Building environmental peace can help us ensure a more peaceful, equitable and sustainable future for people and the planet.

The opinions, information and opinions expressed in the written publications are the property of the contributors and do not necessarily reflect those shared by the Geneva Center for Security Policy or its employees. GCSP is not responsible and may not always verify the accuracy of the information contained in written publications provided by an author.